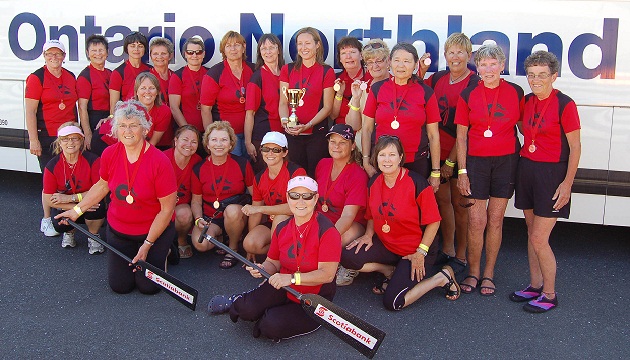 Formed in October 1999, The Warriors of Hope are a team of Breast Cancer Survivors who participate in Dragonboat Racing as an example of what people can accomplish after breast cancer. With the support of volunteers and associate members, this team of determined and energetic women has become a role model for cancer survivors, in not only North Bay, but also wherever they compete.

Community support in North Bay has been fantastic and the Warriors have a winning record of accomplishment, not only on the water, but in attaining their other objectives. The Warriors not only work to raise public awareness of breast cancer but they also focus on supporting breast cancer survival, particularly through active fitness programs like dragonboat racing.

Through the generous support of ScotiaBank, the Warriors have their own practice boat – ‘Jane’- named to honour those who have gone before and those who will surely follow. From the time the ice leaves Trout Lake until it returns in the fall, the Warriors are on the water practising and getting stronger as individuals and as a team. A look at their paddling record will attest to the competitive will of the Warriors of Hope.

Part of the beauty of the sport is in the dragonboats and the culture and history they represent. Once made of hollowed logs and now of fiber-resin construction, the curiously concave hulls are from a design developed by Chinese fishers thousands of years ago. As one of the most venerated of Chinese zodiac figures, the dragon symbolizes control over the water, and during festivals the 57-foot boats are fitted with colorful, fierce-looking heads and tails.

As the legend goes, dragonboat racing began some time after 400 B.C., when a statesmen and poet named Qu Yuan drowned himself in southern China’s Mi Lo River to protest the tyrannical regime of the Chu Dynasty. Fishers on shore raced out to save him, paddles flying, but they failed. To prevent fish and water dragons from eating his body, they beat the water with their paddles, pounded on drums and threw rice cakes wrapped in bamboo into the water.

Dragonboat racing now commemorates Qu Yuan’s sacrifice by re-enacting the rescue effort, celebrated in China on the fifth day of the fifth moon of the Chinese lunar calendar. Today, The Warriors honour the spirit of the dragon – which is the spirit of coming together and working as a team for a common goal.

The Warriors of Hope logo signifies the ongoing fight against breast cancer and the celebration of each victory. The image of the water dragon, often used in ancient combat, is representative of strength – conveyed by strong lines and strong colours.

Since Vancouver is where the first breast cancer survivor team was established, Sharon Journeau, one of the founders of the Warriors of Hope, wanted the overall look of the logo to be reminiscent of the native Indians of British Columbia. A simple undulating line depicts a moving forward, not only of the crew and boat in water, but of the battle against breast cancer. The typography chosen conveys a most determined and contentious mood, as does the expression of the dragon’s head. The gentle curves and smooth sculpted lines bring forward a feminine feel, however, collectively these elements create a fierce image of conflict – the battle against breast cancer.

Our Founder and First President, Tish Wilson chose the colours of the logo – black, red and gold on a white background. They represent the many cultures of the world, all of whom are affected by breast cancer. Penney & Company designed the logo for the Warriors of Hope.